​​​LIBBATON GOLF CLUB
Supporting F.I.G.(Families in Grief) & Over and above for 2021
LIBBATON GOLF CLUB – CHARITY FIND RAISING 2020/2021
December 2021 saw our chosen charities, Over and Above & Families in Grief, presented with cheques for £3,350 each. (Pictures below)
Covid regulations restricted fund raising activities at the beginning of the year but the Charity Committee, with the support of members, managed to raise almost £7,000.
Events included: The main fundraising event of the year was our Charity Golf Day which was well supported by members and visiting golfers. Local businesses generously donated prizes and auction items which helped to boost the takings on the day.
The Charity Committee thank everyone for their support and look forward to organising events for 2021/22 when we will be raising funds for
FiG (Families in Grief), Elf (Exeter Leukaemia Fund) and North Devon Children’s Holiday Foundation.
A HUGE THANK YOU to everyone for their support on our Annual Charity Day - a full report to follow. Below are the Trophy winners for each section. 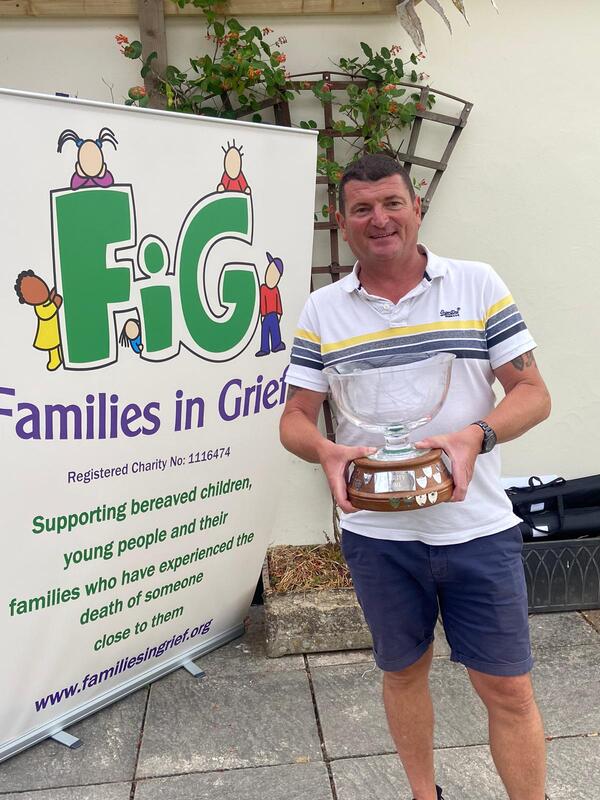 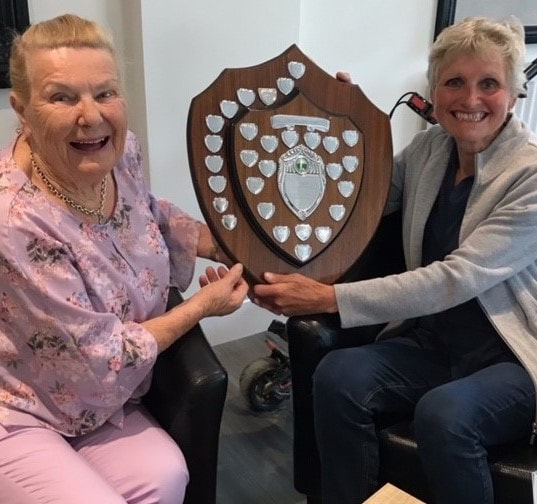 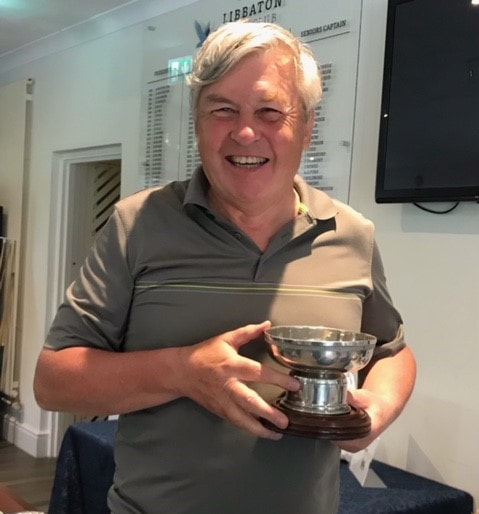 In the grand scheme of things Libbaton is a relatively small club but year after year, thanks to the generosity of its members, locals to the area and visitors to the club, achieves marvellous results and 2019 has been no exception. Through various events and challenges £7,000 was raised for charity.
On 2nd November, Robin Buckland of the North Devon Children's Holiday Foundation and Sue Beer from the Northern Devon Food Bank were each handed a cheque for £3,500 by Ben James, the Club President.
ABSEIL FOR OUR CHARITIES
On a cold and blustery day, at the top of the 200 foot cliffs at Hartland Point, we both had the same thought. “Oh poo, what the hell are we doing?” Neither of us having experienced abseiling before we were both wishing we were somewhere else! We were given harnesses and hard hats - not the most attractive look - and when we got to the edge, instructions on what to do and what not to do. And one by one, we went over the top into the unknown. The hardest part was getting over the very uneven ground at the top of the cliff but once that was cleared and we were on the cliff face proper, we were on our way. The wind buffeted us a couple of times and we swung like a pendulum, but we made it safely to the base of the cliff and touched down on terra firma. We both had legs like jelly and needed support across the boulders littering the shore. Once we had climbed back to the top of the cliff (no mean feat in itself), it started to dawn on us that we had really achieved something special.
All those who sponsored us have done something equally special. You helped us raise the amazing sum of £845.50.
Thank you so much. This will be added to the charity pot which we are hoping this year will be in excess of £7,000 and will be divided equally between the North Devon Children’s Holiday Foundation and The North Devon Food Bank with cheques being presented to the Charities’ representatives on Presentation Night on 26th October.
We are now wondering what outrageous thing we can do next year!
Thank you again.
Bev and Linda 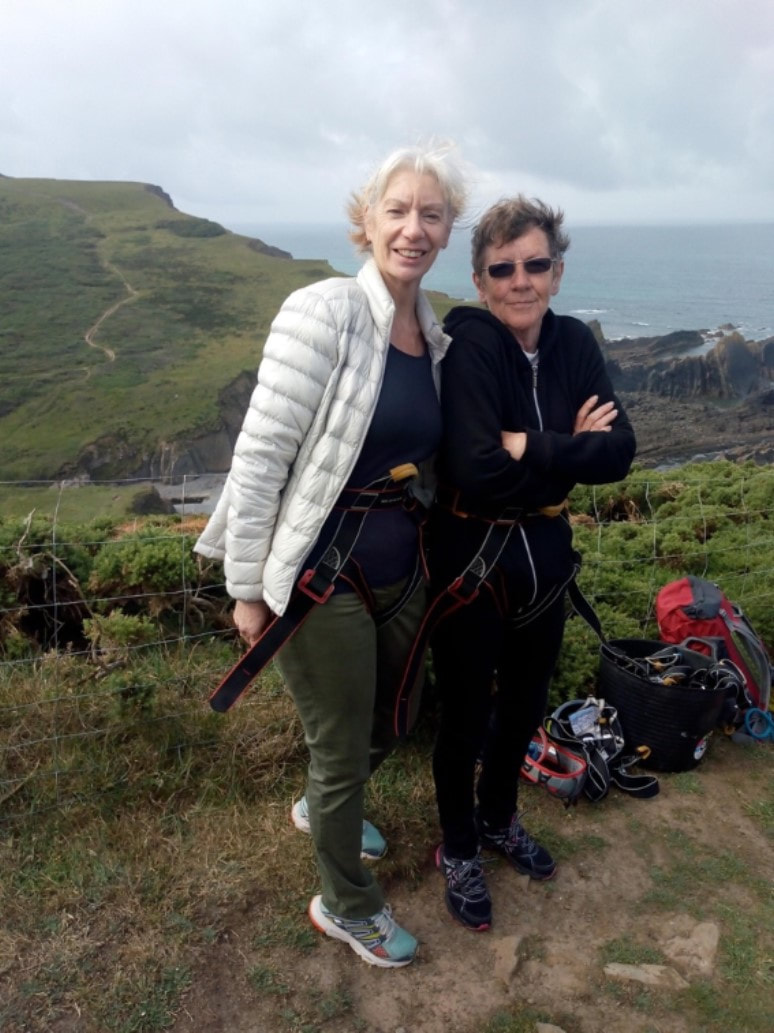 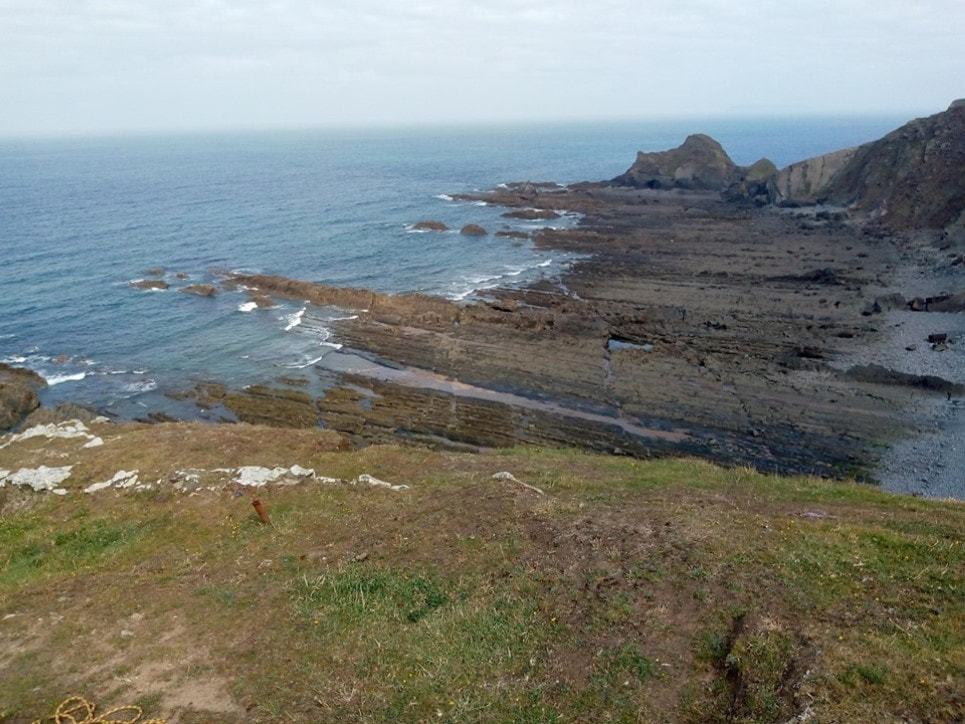 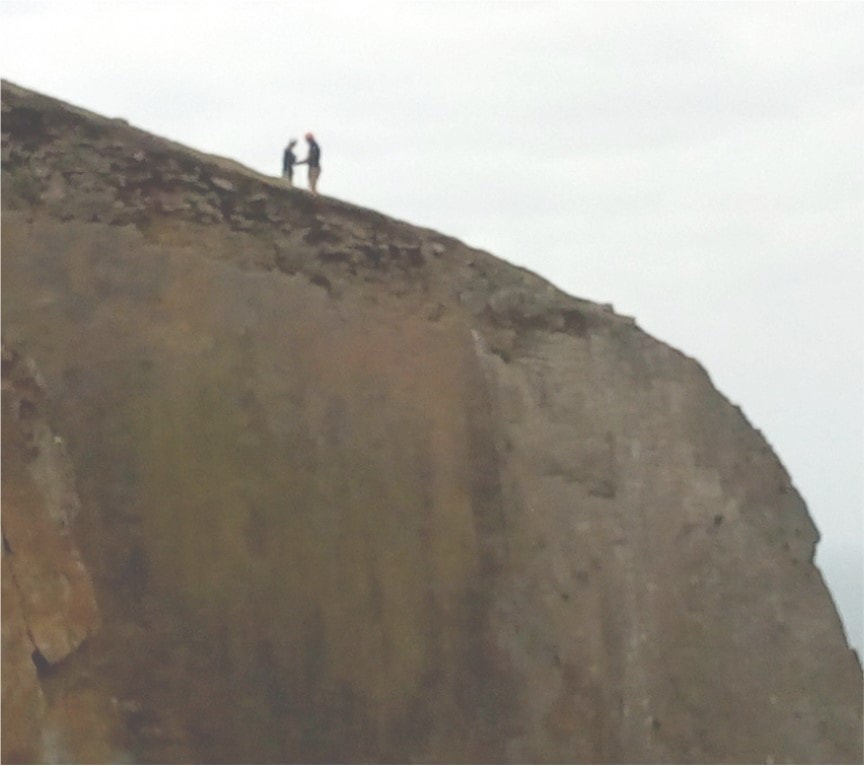 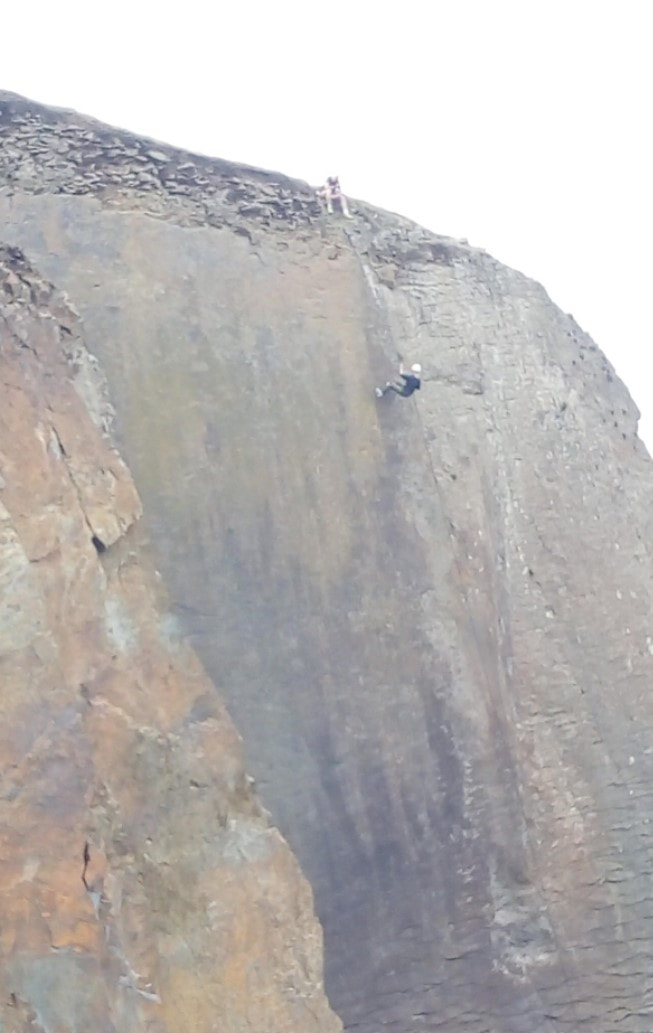 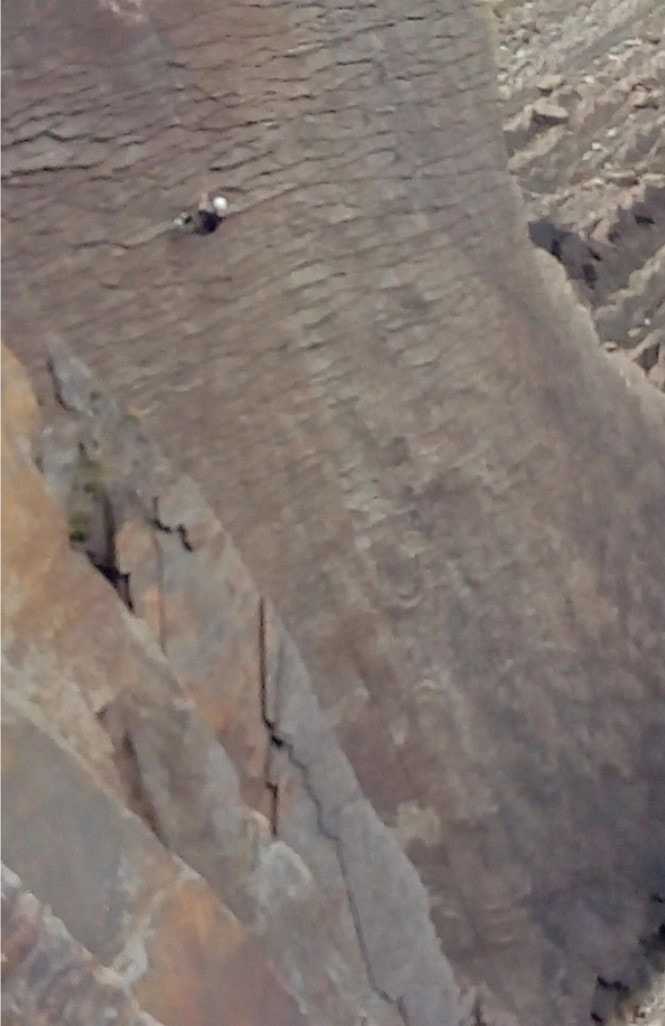 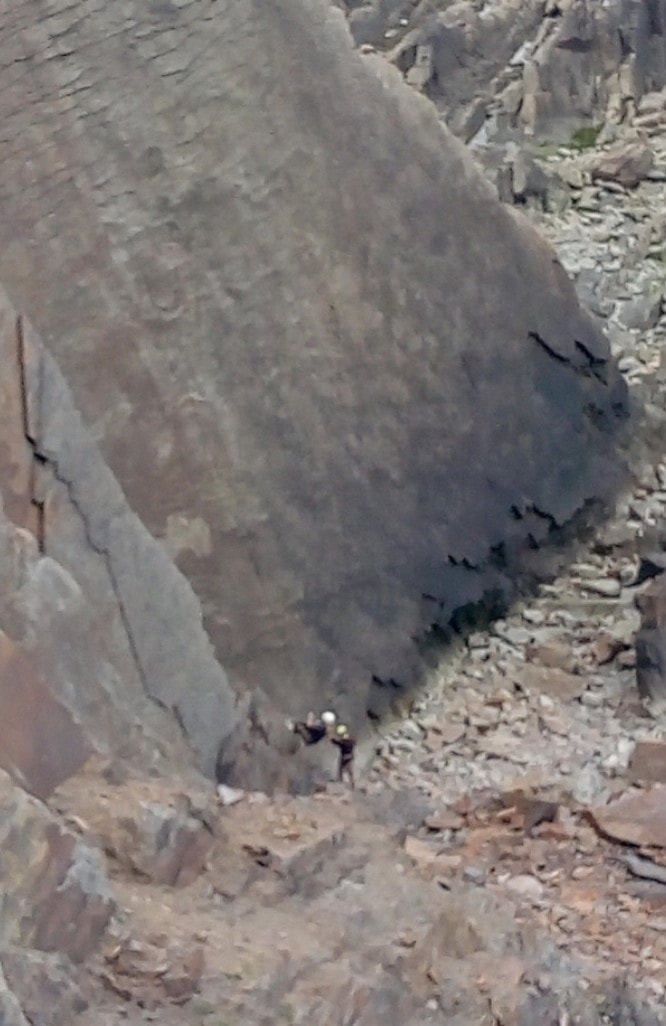 ​Libbaton Golf Club's Annual Charity Day 2019
THANK YOU to everyone who contributed to our Charity Day which was held on 22nd June and to let you know that
we made the FANTASTIC sum of £4,163.90.
Throughout the year we organise several events to raise money for our nominated charities which this year are
The North Devon Children’s Holiday Foundation and the Northern Devon Food Bank.
The money raised on our Charity Day will be added to the fundraising pot which will be shared equally between the two charities and handed to their representatives in October at our Annual Presentation Evening.
In the grand scheme of things, Libbaton is a relatively small club but year after year the Charity Committee achieves marvellous results thanks in part to your generosity.
Thank you again.
​
​
A Very BIG THANK YOU from the Junior Section for the fantastic support on the Christmas Bingo night.
We had a brilliant evening and an amazing amount of £550.00 was raised.
So thank you once again to everyone who came along.
Wishing you all a Happy New Year
from the Junior Section 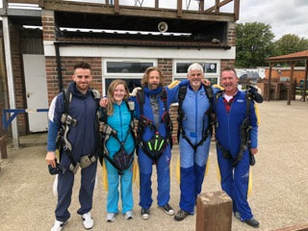 LIBBATON GOLF CLUB CHARITY SKYDIVE
On 8th September, five brave souls launched themselves out of an aircraft at 12,000 feet,
to raise money for the Club’s charities which, this year, are
The North Devon Children’s Holiday Foundation and Chemo-Hero - Kindness in a Box.
From Left to Right they are:-
Aidan Griffiths, Rachael Griffiths, Matt Wooden, Gary Griffiths and Michael Griffiths


It is fair to say that all five were nervous but excited in equal measure.
It was an overcast day but a break in the cloud enabled spectators to see the parachutists leave the aircraft and free-fall for about 45 seconds which, according to all five, was breathtaking.
When the parachutes were opened they took control of the cords for part of the descent to steer themselves to the landing site.
Back on terra firma they all agreed that the whole day was a totally exhilarating experience.
The Charity Committee of Libbaton Golf Club wish to thank the five who took up the challenge and all those who sponsored the event.
​The magnificent sum of £1,428 was raised.  Thank you. 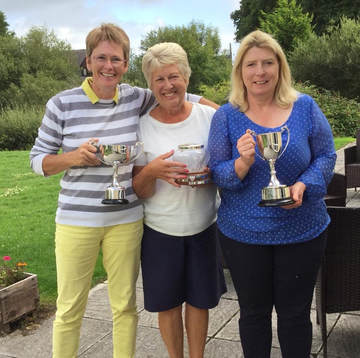 LADIES 36 HOLE CHAMPIONSHIP 2018
10 ladies ventured out on Thursday 16 August to play the 36 hole Championship.
Followed by 7 ladies in the morning round of the 10th EG medal and Sally Evans Bowl. 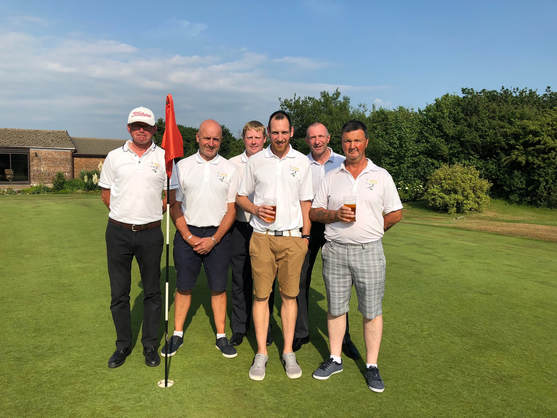 CONGRATULATIONS  to the our Team.
Winners of the Palairet Plate 2018.
Played at Holsworthy on Sunday 1st July.
Winning with a combined score of 107pts.

A Huge Thank You to everyone who helped towards this event and to all those who played  - what a fantastic day.
On 23rd June, Libbaton Golf Club held its Annual Charity Day Competition to raise money for the Club’s charities which this year are
The North Devon Children’s Holiday Foundation and ChemoHero - Kindness in a Box.
The North Devon Children’s Holiday Foundation takes seriously ill children, with their carers, on a holiday of a lifetime to Disney in Florida. Photographs taken during the latest holiday in April show some of the children swimming with dolphins.  The pure joy on their smiling faces says it all!
ChemoHero - Kindness in a Box is a charity set up to provide a box of goodies to those undergoing chemotherapy.  The box includes hand cream, a drink, snacks, honey (donated by Quince Honey Farm), wipes and many other useful items.
Ninety-four golfers took part in the competition - the weather was perfect and the course in great condition. The Charity Committee wish to thank all those who entered the competition, sponsored a hole, made a donation, bought a lot in the auction or bought raffle tickets.  Thanks to your generosity, the marvellous sum of £3,826 was raised.  For a golf club with a relatively small membership, this is a wonderful achievement.
​Thank you.
Libbaton Golf Club, High Bickington, Umberleigh, Devon EX37 9BS
E: enquiries.libbatongc@live.co.uk  ​ T: 01769 560269
All rights reserved. Copyright 2018.